Sue's place in the sun

I joined in the wonderful swap run by Cheryll. This is always so much fun and such a surprise when the parcel arrives

I sent to Illene a tree, a stitched angel mini quilt and an apron. The apron I made using one that I was gifted in the Millrosie swap last Christmas, I even had some of the same fabrics that are in my apron. 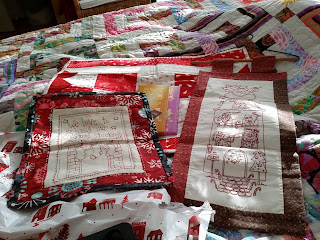 It has been a while, life has been one huge roller coaster ride of emotions over the last 5 months. Things happen in life that no matter who you are or what you do they hit you in the gut and wind you.

Put simply it has been something that I never expected to happen but shit happens and it has robbed me mostly of my sewing mojo. I haven't been to a North of the Yarra Quilt guild meeting or sew day since Christmas, I miss the time out to sew but other stuff keeps getting in the way and it has been easier to just not go than try to explain what has been happening.

I've done some sewing and deliberately signed up to swaps to make me sew. I have also gone to Langwarrin and Lee's studio to do a group FMQ class with ladies from the Victorian QCA facebook page. It was great fun and has got me sewing because you have homework and it has to be done and I really am enjoying using my big fancy Pfaff Grand quilter.

Looking through my photos from the last couple of months I joined Samelias mum, Anorina over on instagram #needlecase swap mine went to the USA and has arrived so I can show you what I made. I used a Aussie flora print scraps from 20 years ago, you know you never throw anything out.

Working backwards May is Sports Chaplaincy Australia (SCA) National Champions dinner at the MCG. Former Wallaby Captain Nick Farr-Jones was our special guest. Glenn Ridge hosted the night and a good night was had by all

Two nights later and we were there again with friends down from Sydney who are SCG members. This time for the AFL game between Collingwood and Geelong. Needless to say Steve's team Collingwood lost to Geelong as did my Penrith Panthers playing against the Brisbane Broncos 8-5 in the final 30 seconds of the game. I was following along on my phone on the NRL app.

That week was a hell of week. This is what a kangaroo does to your car at 110 km per hour down the Calder Highway at 12.30am. It should be back in my garage tomorrow or Tuesday, there was no damage done to the engine or frame but we do have 1 of 400 Outlanders that were specials made in 2010 so spare parts are new parts.


April we went to Sydney for work and as we were planning the meeting realised that Easter was the following week. We decided to stay and spend some time with our Sydney kids and catch up with some friends. One day Steve had a meeting at Homebush at the NSW SCA desk at Sports House. Kate, Violet and I went shopping including a patchwork shop at Rydalmere, while there Violet picked out fabric for grandma to make a dress for her birthday, she picked the most expensive fabric I bought that day. Auntie Jaclyn made her a cardigan to go with it and I added a couple of long sleeve t-shirts to wear under it.


We also went to the Royal Easter Show which we had not been to for a few years. The day was overcast and we had a few showers but seats in the grandstand gave us somewhere to sit and watch the fireworks that night as well as other attractions in the main ring like grand parade.

If you have go this far thanks for reading an I will do another post tomorrow to show you the quilts that talked to me at the Australian Quilt Convention at Carlton Gardens also in April.

If you really want to know what's happening email me and I can let you know but at the moment we are taking each day as it comes and the next 6 months are going to be interesting.

Monday I spent the day at Melbourne Zoo with my girls, Kate has shared photos here. While we went to Mildura they visited Werribee Open Range Zoo, as well.
We were very glad on Tuesday that we had gone to the zoo on Monday as we all got wet getting back to the car after visiting GJ's Fabrics in Brunswick East, so instead of heading to DFO Essendon we drove into South Wharf for lunch and spot of outlet shopping.
We picked Steve up from work and drove home where we organised a baked dinner with Elizabeth and Jared joining us and saying goodbye to the girls before they headed home on Wednesday

Can you tell I'm tired

Christmas seems to have been happening for the last 3 weeks, first Josh Jaclyn and Charlotte arrived on 18th December before they headed to the Blue Mountains to have Christmas with Jac's family. We had Christmas with Josh Jac and Charlotte, Elizabeth and Jared and exchanged presents on 22nd December.

Christmas day Elizabeth and Jared were here for lunch. After lunch Lego was built.

New Years Day Chris arrived and visited for a week as the firm he works for closed until 7th January, then last Thursday Kate, Lily and Violet surprised me by driving down from Sydney (Steve knew they were coming). They went home Wednesday morning and yesterday we cleaned up and today I have been organising my sewing area which hasn't been touched in weeks.

What have we been up to with all those visitors, a trip to Anglesea to feed Jared's beach mission team. On the way home we stopped at Torquay where Steve watched a wind surfer. 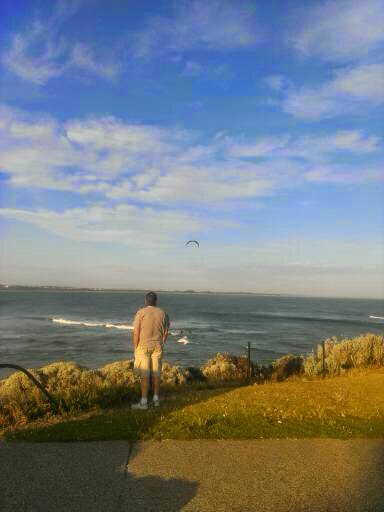 While in Sydney Jac's nana died on 31st December, the funeral was last Thursday, we offered her if she flew to Melbourne we would drive her and Charlotte back to Mildura. Josh had decided on the day they were due to go home (30th) that he needed to be back home for Frankie the cat who was being cared for by friends.
Last Friday we picked up Jaclyn and Charlie at the airport and drove straight out to Mildura, spent Saturday doing stuff with them and then headed back to the surprise visitors at our place. I finally finished hand quilting Charlotte's quilt and gave it to her.

All the lovely presents that I received from Raewyn.  Raewyn did it from memory and made me two wonderful gifts, the table topper will go on the table when Steve has finished sorting Lego and the stitcher's stocking and the lovely things in it will find a place in my sewing space.


These are the gifts I sent Florence in France, I haven't seen the main present on her blog but do know she received her parcel. I wrapped it in a metre of Annie Downs 12 Days of Christmas fabric.

Thanks chookyblue for organising this fabulous swap again.

Parcel sent to Florence in France as part of Chookyblue's SSCS, you can go see the inside on her blog.
Chooky has been a great swap mumma again and all these wonderful parcels are winging there way around the globe.

The rest of the parcel is under the tree to be opened on Christmas Day
Posted by Sue at 10:44 PM 5 comments:

I finally got photos of the quilt I made Elizabeth and Jared, Elizabeth clearly didn't want to be in the photos 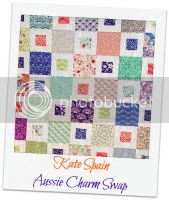